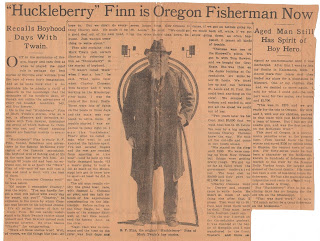 For as long as I can recall, it has been my understanding that the real inspiration for Mark Twain’s character, Huckleberry Finn, was a childhood companion by the name of Tom Blankenship.  Yes, I have read that in an 1885 interview Twain stated that Huck Finn was not based on any one person, but was a composite of several.  However, in Mark Twain’s Autobiography Twain said, “In Huckleberry Finn I have drawn Tom Blankenship exactly as he was.  He was ignorant, unwashed, insufficiently fed; but he had as good a heart as ever any boy had.”  Tom Blankenship has long been stored in my mind as the real Huck Finn.
Recently I obtained a stack of old papers related to Mark Twain – a couple of advertising pamphlets, some clipped magazine ads, and some clipped newspaper articles.  One of the articles was titled “Huckleberry” Finn is Oregon Fisherman Now.  I read the article and was somewhat confounded.  According to this the real Huckleberry Finn was a man named B. F. Finn.  I have included a scan so that those wishing to read the article can do so.  Click on the image to enlarge it.  Then click the white X in the upper right hand corner within the black-framed area to return. 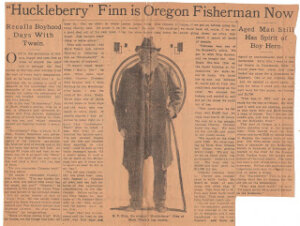 The article was clipped.  The newspaper was not identified and the date was not given.  I wanted to know more, so I began searching on the internet and came across this article apparently from the Sunday Oregonian, March 15, 1915.  It was very similar to the clipped article I have, but with some differences.  The Oregonian article states that the subject, B. F. Finn, is 90 years old.  My article says he is 92, so it may have been printed a couple of years later.  The pictures of him from the two articles are different, but it looks as though he is wearing the same clothes and carrying the same stick.
Some interesting points from the articles include:
I have done at least a minimal amount of research to see if I could verify the stories.  I found several listings of the steamboats that Clemens piloted, and none included the Shotwell or the Gray Eagle.  I found a reference to a race between a boat called the Eclipse and the Shotwell.  Twain talks about these two boats in Life on the Mississippi, Chapter 16, Racing Days (see paragraphs 4 and 12), but does not say that he was ever on either of them.
From the Steamboat Times website, which cites as a source Old times on the Mississippi:  reflections of a steamboat pilot, by George Byron Merrick, I also found that there was a well-known race of sorts between the Itasca and the Grey Eagle.  Twain was not involved.  B. F. Finn and Tom Sawyer are not mentioned.  The Grey Eagle of this race is spelled with an “e” in Grey (except for once) whereas in the articles about B. F. Finn, it is spelled with an “a”.  Still it is reasonable to think the same boat is being referenced.  The time frame of the mid-1850’s leading up to about 1860 seems to fit.
The Steamboat Times states, “Captain D. Smith Harris had, the year before, brought out the “Grey Eagle”, which had been built at Cincinnati at a cost of $60,000.”  The year would have been 1855.  The newspaper article states, according to Finn, that he, Clemens, and Sawyer bought the boat for $9,000 and later were paid $12,000 for it.
So, was B. F. Finn the real Huckleberry Finn?  To me, it seems very doubtful.  I could find no mention of him by Samuel Clemens, though my search was far from exhaustive.  This is pure speculation, but the thought comes to me that B. F. Finn, being 90+ years old, could have been confused about certain facts at the time the articles were written.  He may have been a “huckleberry” on a riverboat at one time and may have been given the nickname of Huckleberry Finn.  He may have known a Charley Clemens.  Likely he had spent time on the river.  He may have been on one or more of the boats mentioned.  Samuel Clemens may have even known him or of him and the name may have influenced the name of his character, or it may have been coincidence.  It’s hard to say.
For now, with lack of further evidence, I will continue to consider Tom Blankenship to be the real Huck Finn, but I would like to know more about B. F. Finn and the life he led, particularly on the Mississippi River.
I would appreciate comments from anyone who knows anything that can shed more light on this topic.
Post Views: 47
Category: Mark Twain
Leave a Reply Cancel reply