Mark Twain was an American author and humorist.  He was very popular in his time, earning praise for his incisive satire from critics and peers alike.  He was touted as the “greatest American humorist of his age”. 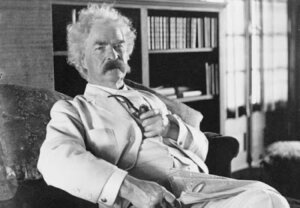 Twain was born during a visit by Halley’s Comet, and he predicted that he would “go out with it,” too. He died the day following the comet’s subsequent return.

We have numerous Twain first editions, collectible books, ephemera, and more that can be found at the following links: