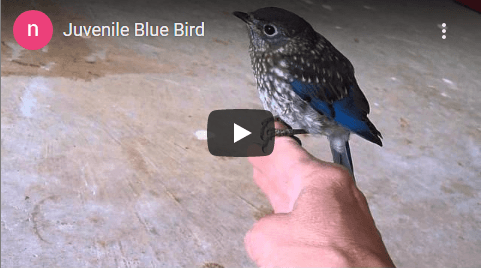 We found this bird under a tree on its back and unable to move. Setting it upright resulted in it falling over initially. After I worked its legs manually, it was able to move the right leg on its own. I moved him away from potential predators and continued monitoring it throughout the day. It wouldn’t take water or crushed strawberries, but it got stronger and stronger on its own. First it was able to perch, then later hop a little. During the last perch session, it sang for me. I moved it out into the open and it flew away to the closest tree, yea!  Bye, Bye Blue Bird. I hope it makes it.