Agricultural Almanac for the Year 1874, Life As I Find It (Poor Little Stephen Girard)

The story involved here, Life As I Find It (or Little Stephen Girard), after years in BAL as a Twain item was apparently shown a few years ago to have been written by someone else. This piece, therefore, though in BAL as being by Twain, is not by him and but remains a very interesting and uncommon Twain-related item. Here is a link to the explanation of how it was shown to be by someone other than Twain.

Note that on page A 2, under “1874;” the word “the” is printed upside down (scan provided). I also have a copy with “the” correctly printed.

Good with torn and bent corners and general tattering of edges. Back cover is split from spine from bottom about one fourth of the way up. Spine has apparently been hand-stitched as a repair. 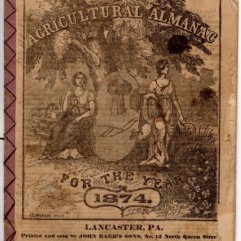 You're viewing: Agricultural Almanac for the Year 1874, Life As I Find It (Poor Little Stephen Girard) $100.00
Add to cart