Agricultural Almanac for the Year 1874, Life As I Find It

The story involved here, Life As I Find It (or Little Stephen Girard), after years in BAL as a Twain item was apparently shown a few years ago to have been written by someone else. This piece, therefore, though in BAL as being by Twain, is not by him, but remains a very interesting and uncommon Twain-related item. Here is a link to the explanation of how it was shown to be by someone other than Twain.

This copy apparently is missing the outermost cover. Fair to good overall. 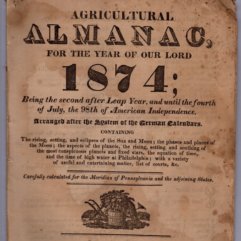