Colonel Sellers is a character who first made an appearance in Mark Twain’s novel, The Guilded Age, published in 1873. The Guilded Age is the only novel that was a written collaboration between Mark Twain and Charles Dudley Warner. The novel criticizes a period of gross materialism and blatant political corruption in U.S. history during the 1870s.

The Guilded Age gave rise to a play called Colonel Sellers who was portrayed by the actor John T. Raymond. This card was a picture taken of the actor during a performance in Dubuque, Indiana, in June of 1879.  The gilt card is in fine condition.

There are numerous other cards depicting John T. Raymond in our collection including Between the Acts and Bravo Cigarettes. This is one of a set of over 500 cards issued between 1880 and 1892. 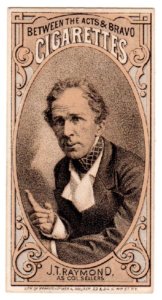