Postmarked April 16, 1890. Charles L. Webster & Co. was Twain’s own publishing company, started in 1884. Webster, his nephew by marriage, was Twain’s jr. partner and first manager of the business. They published Adventures of Huckleberry Finn in 1885. They also had great success with U. S. Grant’s Memoirs in 1886, among other titles. Webster, out of favor with Twain and suffering health issues, was out of the business by the end of 1888. The company went on to publish a number of Twain’s books including Connecticutt Yankee, Merry Tales, The American Claimant, the £1,000,000 Bank Note, Pudd’nhead Wilson, Tom Sawyer Abroad, and Mark Twain’s Library of Humor. 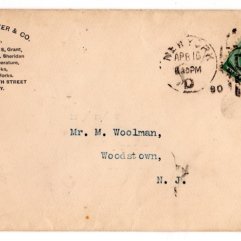