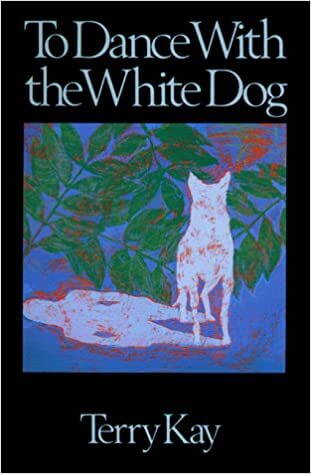 I am just in awe at the author’s telling of this story. I felt the emotions when Sam Peck lost his wife of 50 years. I understood the worry of Sam’s children for their father and what a difficult struggle he was likely to have losing his love and life companion, Cora. I felt their concern when Sam begins to see a mysterious white dog that is never around when they are there. A great author like Terry Kay really puts you there… in the story.

I finished “To Dance with the White Dog” on a plane sitting next to my husband on our way to a ski vacation.  As I finished the last few pages, I could not hold back the tears. After I closed the back cover, I struggled to tell my husband why I was crying.  The book really touched me, I mean really touched me.  So much so that years later at a book signing, I choked up again as I handed my copy of “To Dance with the White Dog” to Terry Kay for him to sign.  He inscribed “For Kathy-who honors me by caring for The White Dog. Warmest Regards-Terry Kay 12-10-93” and said kind words to put me at ease.

Since then I have read nearly all of Terry Kay’s books.  They are all excellent, but here are a few that you simply must read.

Written in 1976, “The Year the Lights Came On” was the first. This tells of the Rural Electric Association (REA) bringing electricity to a small town in northeast Georgia. More importantly, this book paints a picture of rural America told through eyes of Colin and his brother, Wesley. Through this book you will experience friendships, loyalty, schoolground fights and drama, and what life was like on the wrong side of Route 17 and the railroad tracks.

“The Runaway” (1997) is perhaps my favorite because it is reminiscent of another of my favorites, “To Kill a Mockingbird”.  It is set in the 1940’s where you quickly become a part of the relationship between 2 boys, one black and one white, Tom and Son Jesus. They love to daydream and will do anything they can to avoid work which is what brings them to find a mysterious bone.  They unwittingly unleash a murder investigation and a flood of racial conflict. The story is remarkable and the characters will warm your heart.

I read “Taking Lottie Home” (2000) fairly recently; I don’t know how I missed this one since we have a first edition sitting on our shelves. Ben Phelps and his high school buddy, Milo go off to play professional baseball. Milo makes it to the big leagues, but Ben is cut along with Foster Lanier who had success for a while until his injured leg and heavy drinking slows him down too much.  They meet Lottie on the train ride to their respective home towns. Lottie had run away with a salesman, but they part ways, and Lottie, Ben and Foster’s lives became intertwined for years to come.  Through deceit and hardships, it all comes together with doing the right thing. Thanks, my friend Janet, for lending me your copy of this book.

“The Book of Marie” (2007) is a story about Cole and Marie.  They first meet in 1955 at Overton High School shortly after Marie transfers to the south from Washington, D.C.  Marie strikes a long-lasting friendship with Cole and in her valedictorian address, foretells of the coming social changes. Cole falls in love; Marie keeps her distance, yet in a funny turn of events convince their classmates they have a great romance. They meet again 15 years later at a high school reunion. The odd letters they shared over the years and the relationships formed as a result of the reunion tell a historical story of the influences of the time. Like all of Terry Kay’s books, there is a stark truth to the history and the character of people.

“After Eli” (1981) is very different than any other of Mr. Kay’s books. To me it was somewhat mystical and somewhat dark. It keeps you enthralled! Michael O’Rear enchants 3 women in an Appalachian village when he comes to town; Rachel, the widow of Eli, her sister and daughter. Michael plays them and preys on them, spurred by the legend of Eli’s hidden treasure.

“The King Who Made Paper Flowers” (2016) as of this blog post, is the most recent. It is the story of Arthur Benjamin who reluctantly becomes a “king” among semi-homeless vagabonds with a character all their own. A fun novel that will grab your heart-strings as well.

Thank you, Mr. Kay, for your fine writing and for sharing with us stories and characters that are true to life, that fill you with emotion, and make you feel richer for having read them.