The spoon measures 5 1/2″ in length. I believe this is a very early spoon from Twain’s Boyhood Home, if not the earliest. The Mark Twain Boyhood Home opened to the public in 1912. Based on the maker’s registry mark the spoon was made by Watson & Newell Co. (Information obtained from Kovel’s on the internet). The history of this company involves several name changes, and there were some subsudiaries. It was Watson & Newell Co. from 1895 through 1920. The company made many souvenir spoons during that time. Since the Boyhood Home opened to the public in 1912, it seems probable that the spoon was produced between 1912 and 1920, but I am not certain of that.

Here is some Information on Watson Co. obtained from http://www.silvercollection.it/USASILWATSON.html

In the period of 1900 to 1910, the company produced hundreds of sterling souvenir spoons depicting a variety of subjects.

In 1920 The Watson Co. was incorporated and took charge of all the silver operations. Many new flatware patterns continued to be introduced. Clarence L. Watson died in 1930, and his son-in-law, Grover Richards, assumed management of the company. In 1955 the business was sold to R. Wallace & Sons. The dies of Watson souvenir spoons were sold by Wallace, and in the 1970’s were in unused possession of The Inman Co., Inc. of Attleboro, MA.

The spoon is in overall good condition. It may be lightly pitted in places and a little tarnished as can be seen in the images. 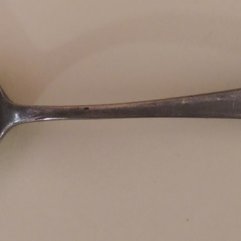