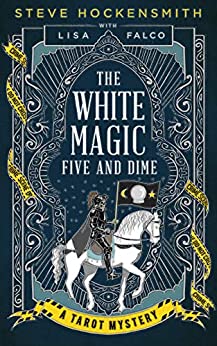 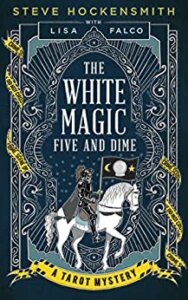 I recently learned that Steve Hockensmith has a new book out.

The White Magic Five & Dime is a contemporary mystery with a tarot theme and is co-written with Lisa Falco.
While perusing the shelves in a local bookstore some years back, I’d guess 2007, I came across a colorful book with an interesting title, and after reading the blurbs decided to give it a chance.

Holmes on the Range introduced me to the writing of Steve Hockensmith and to the Amlingmeyer brothers, the central characters of the book, and to the four books that followed. There’s a signed first edition of the book on ABE Books.

My wife and I usually have a designated book that we read aloud together – on car trips or when we just feel like reading together.  I enjoyed Holmes on the Range enough that I recommended it to her.  After that, each book in the series became our designated book.  We followed the Amlingmeyer brothers through adventure, drama, close shaves, and laughter in:  On the Wrong Track, The Black Dove, The Crack in the Lens, and The World’s Greatest Sleuth.

If you like a mystery, especially light-hearted with humorous dialog and cliff-hanging situations, you likely will enjoy this series of books.  The Amlingmeyer brothers are cowboys turned sleuths, and a classic pair of brothers they are.  Opposites in most ways, but each with attributes that complement the other’s in their endeavors at sleuthing and fighting their way out of tight situations. They are usually at odds with each other, but always looking out for each other.  As you ride along on their adventures and laugh at their disagreements, you also learn their backgrounds and their family history, and you see the relationship between them evolve.  Good fun, good reads.
There is also a book of short stories titled Dear Mr. Holmes that adds to the background of the brothers as well as some additional adventures.

Steve Hockensmith has been a prolific and diverse writer over the past eight or so years.  In addition to books already noted he has written several zombie-themed novels and co-written a series of quirky novels for middle-grade kids.  Add to that a couple of books of mystery short stories titled, Blarney: 12 Tales of Lies Crime and Mystery and Naughty: Nine Tales of Christmas Crime.

I have read only the Amlingmeyer novels and short stories.  The others are outside my normal reading genres, though I am sure Hockensmith’s writing skills would serve them well.  The new mystery novel (The White Magic Five & Dime) is one that I plan to read, and I look forward to meeting some new characters from the source that gave us Big Red and Otto Amlingmeyer.