Pictured here is my well worn copy of the first Flashman novel I ever read.  It has since been around the block a few times.  Passed around and read by quite a few others, somehow it has always found its way back home. 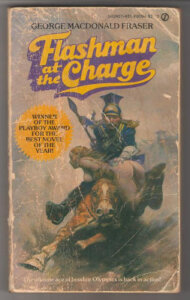 It was early in my second year of college, and I was having difficulty getting into the swing of things.  Wandering aimlessly through the book store I came across what I soon determined would be just the elixir for my doldrums – Flashman at the Charge!
“Winner of the Playboy Award for the Best Novel of the Year”.
“The all-time ace of boudoir Olympics is back in action!”
Sold!  And so it proved to be the start of many hours of pleasurable reading over many years – not just the Flashman novels, but many of Fraser’s other works as well.
So, well into my enjoyment of these writings, when I first began to collect books, Flashman was the only logical place to start.  Not only were these books wonderful reading – exciting, often laugh-out-loud funny, and historically detailed – they were also wonderful to look at, with fantastic artwork on the dust jackets and always plenty of anticipation-rousing blurbs and reviews.  The cover designs of the first UK editions and the first US editions offered variances that made each worth owning.
In May of 2002 my wife, Kathy, planned a trip for us to the Isle of Man, where it just so happened George MacDonald Fraser made his home.  She talked to the owner of the B&B she had booked about the possibility of us being able to meet Mr. Fraser, and the gentlemen told her that he had once owned a bookstore and knew George MacDonald Fraser and would be glad to arrange a meeting for us.  This was exciting stuff.  I carefully packed a somewhat reasonably-sized carry-on bag with as many books as I could get into it.
When we arrived we learned that the B&B proprietor knew Fraser in the sense that he was aware of him.  He knew his books.  He had sold some of them in his book store.  He did not know him personally.  Nevertheless, at my wife’s prodding, he got out his telephone directory and got in touch with Mr. Fraser who agreed to meet us on Saturday afternoon at his golf club.
Mr. Fraser had recently turned 77.  He was just recovering from a cold.  That Saturday was a beautiful sunny afternoon.  I’m sure he had many things he would have preferred to do, likely including spending time with his grandchildren.  Nevertheless, he graciously came to meet us.
We arrived early.  He arrived soon after.  We sat comfortably in a lounge area with very large and well-cushioned chairs and convenient tables.  He chatted cheerfully while signing every one of the books I had hauled in.  He commented that some of the books I had were actually quite valuable now.  He seemed particularly pleased that I had included a copy of Hollywood History of the World and informed me that an updated edition had been issued in paperback only.
He sat, signed, and talked for almost an hour.  I was a bit awestruck, but he made it very easy to feel at home and enjoy the moment.  I remember him telling how as Flashman got popular he fairly often got calls from young fellows, usually college age, asking all sorts of details about Flashman.  The calls came at all hours, but he would take them and talk as long as they wanted to talk, at times somewhat to the consternation of his wife.  He would take the telephone out into the hall and sit on the steps and listen and talk.  And that’s the way he was.  On the day he met with us he seemed genuinely delighted that we cared enough for his work that we would want to visit with him.
We were there during the Isle of Man TT Races.  These are motorcycle time trials that draw enthusiasts from far and near.  At that time as well, Mr. Fraser’s new book “Light’s on at Signpost” was just recently out in book stores.  Signed copies were available, so I bought one for my collection and to carefully read on the flight home.  I learned that the title is a reference to the TT’s.  Multiple laps are run during a time trial.  When a contestant has one lap remaining, there will be a light on at the signpost to signify so.  Similarly Mr. Fraser knew that at his age he had ridden quite a few laps and apparently perceived the light to be on at signpost.  But that is all in the book, and he tells it far better than I.
After we got home, I wrote a letter to Mr. Fraser thanking him for his kindness and hospitality.  In the book I had just read, Mr. Fraser had apologized in advance to all the people who might write to him because he knew he would not be able to personally answer all of them.  Nevertheless, not long after our letter, my wife and I received a response from him.  A short but very nice thank you note, it was unexpected and is now one of our prized possessions. 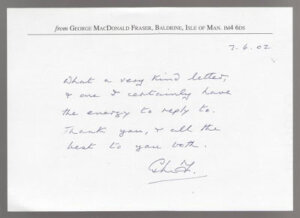 Then, in November a package arrived one day from the Isle of Man.  Inside was a copy of the updated edition of Hollywood History of the World that Mr. Fraser had told us about during our visit.  He had signed it on the title page and included a brief note, “The revised version, with compliments & all good wishes to you both – George Fraser.” 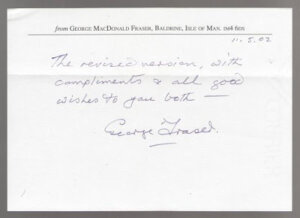 Wow, what a kind and generous man.
I will always be grateful to my wife for planning that trip to the Isle of Man.  It’s a beautiful place, and even without the meeting, we had a wonderful time.  Still, she planned the trip knowing what a fan I am of Mr. Fraser and took all the extra steps to make a dream come true for me.

And I will always be grateful for the many happy hours provided me by Flashman and the incomparable George MacDonald Fraser.