This piece provides an interesting historical perspective. Mark Twain being celebrated while Hitler and Nazism are entrenched and on the rise seem Incompatible.

The top portion of the invitation, down through “Berliner Rathauses.” roughly translates to English as:

The 100th Anniversary of Mark Twain’s birthday. (November 30, 1835)
the signed institutes and associations pay themselves to a Mark Twain commemoration

Afterwards, social gatherings in the rooms of the Berlin City Hall.

At the bottom of the invitation, it roughly translates to:
Asked to be on enclosed postcard Dark Suit 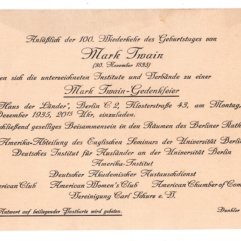